Maintaining and optimizing your current or legacy codebase can be a nightmare situation that is expensive, time consuming and very tedious.  Businesses may need to optimize, organize, clean up and standardize code, and if needed convert code from one language to another.

Choice suppliers have advanced technology and processes that revolutionize the speed of code optimization and dramatically lower the costs and risks of code modernization or conversion. 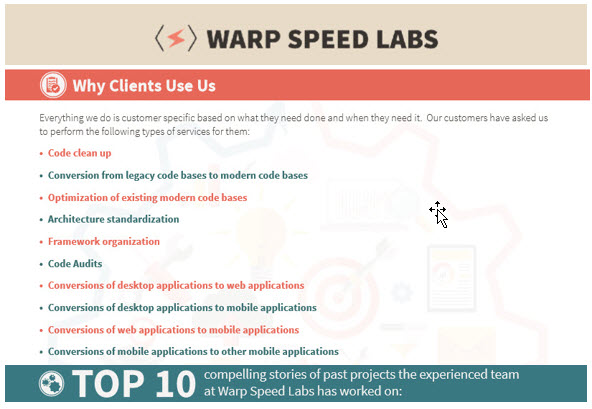 1. We helped a major media company achieve greater efficiency with their Python code base. We increased efficiency by over 60% and had a reduction of code by about 20%
2. We successfully helped a bank optimize an analytics platform. The conversion was from C++ to .NET and contained over a million lines of code. We reduced the code base roughly 20% and streamlined the project from over 1000 classes down to 8 classes.
3. We helped a major retailer migrate from an antiquated Microsoft environment into a more modern environment for tracking their real estate and inventory portfolios. We finished the project in roughly 6 weeks allowing them to complete their fiscal year end. They had no expertise in house that could figure out the problems we were able to solve for them.
4. We converted an old weapons system that was based off of the Palm Pilot and we were able to optimize it for mobile and tablet usage in low connectivity areas for a major defense company. We converted the same weapons application to be able to work on the web as well.
5. We helped a financial company modernize their entire trading platform’s critical systems. They thought it would take them a year to accomplish and we did it in 6 months’ time.
6. We helped insurance companies migrate legacy applications for risk assessment to more modern technologies including mobile, so their in house teams could maintain the codebase easier for the future. This architecture also enabled their reps to carry tablets instead of laptops for visiting clients in the field.
7. We performed a platform conversion that included moving from a Microsoft backed service oriented architecture to a Linux and Java platform that not only significantly improved performance but also eliminated the added financial overhead from the licensing fees.
8. We were able to run a core code conversion from an existing mobile based iOS Service application to an Android Service client to extend our client’s reach into the Google platform. They were objective-c developers with very little knowledge of Android and the Platform SDK.
9. We successfully transformed an enterprise level employee based health benefits system written in Ruby on Rails, which was a manual conversion from a legacy ASP application. Our client was very unhappy with the design of the application, the user interface flaws that were carried over and the speed of the system under moderate use. We re-architected this system using Java as the foundation language and implemented a Jobs, Topics and Queues pattern that significantly improved the applications ability to scale.
10. We did a full Project Platform review for a customer that involved stress testing and a code assessment. Upon reviewing the code we were able to identify multiple points of failure that were unable to grant the assessment certification that our client was requesting. We were able to force N-Tier architecture, build with clear code separation and purpose and remove the overhead of an embedded error handling library. We designed the upgrades around speed and simplicity, which gave the client a much better maintenance course and future enhancement path.